Sequences that name there own position

It can be very interesting to explore the self referential qualities of a digit sequence. One special kind of that is a correspondence between a subsequence and its absolute position in the whole sequence.
If we find the sequence "klm...nop" exactly at position (klm...nop) we call this a CUCKOO POSITION (German: Kuckuckszahl).

Another definition of CUCKOO could be:
SEQUENCE = POSITION of SEQUENCE

The position predicts the following sequence like the couckoo bird shouts its own name.

But where comes the next Couckoo Position and how many of them will be found amongst our 100 billion digits? 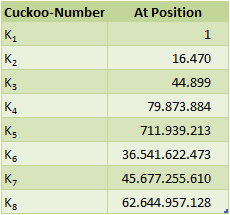 We can extend our view to NEAR CUCKOO POSITIONS which are not exact hits but pretty close to it.

This unfolds a basic statistical behaviour:

If you increase the data tenfold, you generally get one more cuckoo hit.